Here are some things I have done in Humanities. I believe that humanities is a good class that is teaching us about all different things like social studies, literature, and hopefully grammar. I have never had a class called humanities in my past school years, so I think it is new and exciting. I hope that I can take part in this class all 4 years of highschool.
Slideshow for looking glass self meme
This assignment was where we made a slideshow. On the slideshow we put pictures as memes to show how different people think of us.
Looking Glass Self Meme Slideshow
Tea Paragraph​
Arianna Dobeck
Ms. Elder
Humanities
29 September 2022


​                                                                               How Our Race Socializes Us
The human species are very social creatures. We sometimes might band together with people who look like us because we want to fit in. There are sometimes when some people want to be and act like something different than other people, they might be judged and ridiculed because of that. So they try and fit in because of other people’s judgment. This is where our race socializes us. We occasionally like to act like other people who look like us. Does a monkey learn from a parrot? No, they learn from other monkeys. People tend to identify with the race they look like or who they want to be.
According to the documentary Precious Knowledge, teenagers took a class to learn about their own culture, and that socialized them in a positive way. For example, in the documentary, the students said that the class helped them understand themselves and made them happy to go to school. In addition, socialization shapes our identity because we learn how to act from others and learn survival skills.
In the Bear That Wasn't, the main character thought he was a bear. He somehow was socialized away from being a bear even though he was a bear. People thought he was not a bear and told him, and he began to believe what they were saying. This is important because he tried telling people how he viewed himself as a bear, and no one listened, which began to change how he saw himself. This supports my sentence at the beginning of the paragraph where I said that some people don't always want to fit in, but being judged by others makes them fit in. This is what makes Socialization negative, which is shown through the bear. Another way that socialization is bad is that people might treat other races differently because they do not look like them.
Consequently, socialization is fundamentally essential to humans and other creatures as it helps us become ourselves as a person.

​
Mask Brainstorm
This paper is showing how I want my mask to look like and the symbols it is going to have on it.​ 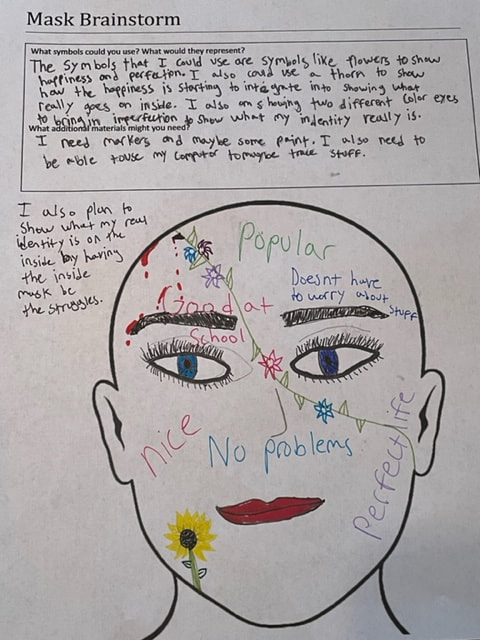 White Privilege Seminar Reflection
This essay is about my reflection on White Privilege and what I learned from it.
Arianna Dobeck
Ms. Elder
Humanities 9
28 September 2022


​                                                                                  My Reflection on White Privilege
In the seminar we did as a class, there were many questions and comments discussing the topic of white privilege. According to the article "White Privilege," the author states, "I have no difficulty finding neighborhoods where people approve of our household," (26). This comment means that, because of someone's race, they do not have to worry about neighbors being rude, unwelcoming, or discriminatory to their family. On the other hand, neighbors might think a family is suspicious because of their race, making me very sad that people may not trust certain people of color or gender. An interesting example was when I lived in a different state, and my grandparents took care of me a lot. They live in a very diverse neighborhood. One day an Indian family moved in across the street, and right away, the dad came up to my grandfather and asked him whether he was okay with the family moving into the neighborhood. My grandpa was shocked at the question as he had never been asked that before. Of course, he said, "Yes, and welcome to the neighborhood." Then I started hanging out with their son and playing with him because he was the same age as me. This makes me realize that a white person would never have considered asking that. So the fact that asking this question was on the new neighbor's mind represented how some people of different ethnicities have to consider how others perceive them.
There are many other examples of white privilege that I never realized. The author, Peggy McIntosh, observes many examples of white privilege or racism, including how she "can easily buy posters, postcards, picture books, greeting cards, dolls, toys, and children's magazines featuring people of [her] race" (25). This idea means that certain races might not be represented in different parts of society, like movies or toys. A couple of examples would be that back in the day, there were no diverse Barbie dolls, just blond Barbies. Things have changed now, and there is more diversity in Barbie dolls. Likewise, we have many Lego sets, and after examining the sets with characters, there is no diversity in any of them.
The movie industry has also lacked diversity. When looking at movies in the past, there was always a trio of white, mean girls. The quirky main character's friend might have been a different ethnicity, but that was the only diversity in many Hollywood movies. Our society is trying to change that, and having diversity in the media is more common now, but it was not many years ago that it changed. I am now more aware of this issue than I was before.
One specific movie examining white privilege is a movie called “The Hate U Give.” I watched this movie years back, and it is from a book. The film was about a black girl whose childhood best friend was shot brutally by a police officer when he never did anything. She was right there when she saw him get shot. This movie talks about how people sometimes do not trust people of color. In the film, the friend was pulled over by a police officer, and she was in the car. The officer made him leave the car, and he was not doing anything. He reached for a hairbrush inside the car, and the police officer shot him. This exemplifies how white people don't always have to worry about this.
This idea was confirmed by my mom's cousin who is a lawyer and is very familiar with the justice system. Justice is supposed to be blind because the justice statue is a woman blindfolded holding a scale. Everyone is supposed to be equal under the law, and Justice does not care what a person looks like. It is sad, but even though people are supposed to be equal in court, minorities are often treated more harshly. I am from a mixed-race family, and my cousin is half black and wears long dreads. He has always been an awesome cousin to me and super sweet. We have a significant age difference, but he still pays attention to me and treats me kindly. I had never realized he had problems, but this article made me reflect on how people perceive me versus what people think of him. He has had a few issues with police officers over the years,  but I cannot comprehend that because he is such a kind and awesome cousin. Would those police officers treat me the same way they treat him? I don't know, but I feel that racism is an unfortunate thing that happens. I hope it changes.

The Identity Mask Essay is about how I have been socialized in society. The Mask Identity is about how my Mask represents me and the symbols it gives off.
Identity Essay
Mask Essay